What is a Meteorite?

A meteorite is a rock from space that passes through the atmosphere and survives impact with the ground. Most meteorites originate from larger asteroid bodies orbiting the Sun in the asteroid belt between Mars and Jupiter. Collisions and gravitational interactions between asteroids can send smaller pieces into the inner solar system where they can intersect with Earth’s orbit to become part of the thousands of meteorites that fall to earth. The Earth collides with thousands of small pieces of this material from outer space producing the sporadic shooting stars and fireball meteors seen at night. Several larger meteoroids collide with the Earth every day with some landing in the oceans and others on land. 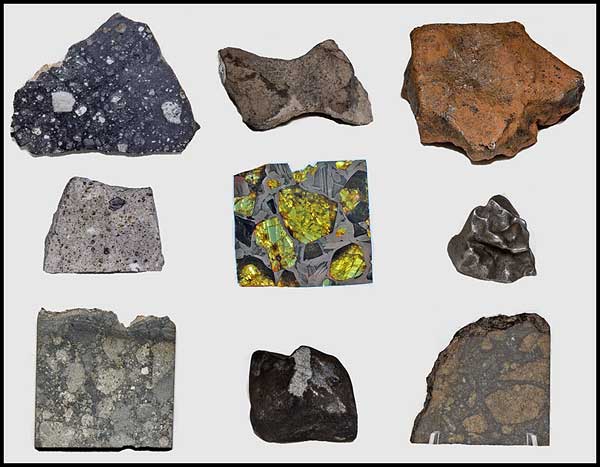 A meteor is the streak of light we see at night as a small meteoroid burns up passing through our atmosphere. A fireball is a very bright meteor and may actually break up and drop meteorites. Meteors and fireballs are commonly referred to as shooting stars. In addition, each year the Earth passes through the orbits of comets and the dust from these comets produce a meteor shower. Meteor showers happen as tiny bits of material from dust size to the size of a grain of wheat. They burn up almost completely high in the atmosphere dozens of miles above the Earth’s surface. It’s important to note that some people call these events meteorite showers but this is not accurate as meteor shows do not produce meteorites.

There are three basic types of meteorites, the irons, stony, and the stony-irons. Each of these basic families has subgroups.

The iron group is nearly solid nickel-iron metal. Because of the strength of the metal, some of the largest individuals recovered are iron. Also many of the craters formed by iron meteorites because the asteroids survived without breaking up all the way to the ground. Magnets strongly attract Iron meteorites which look like real metal when you grind a spot off their surface. They show a pattern when etched by chemicals because of the different nickel-iron minerals composing them.

The stone type of meteorite is almost completely rocky material and are also the most common type. There are dozens of subgroups in this family. The simplest breakdown of the stony group is, Chondrites, Achondrites, and the Planetary meteorites containing the achondrites that have unique origins

The stony-irons are a mixture of nearly 50% rock and 50% nickel-iron metal. The two subgroups of the stony-iron meteorites are the pallasites, which contain olivine crystals as the rock component, and the mesosiderites which contain various silicate minerals as the rock portion. In both of these types, the metal portion completely surrounds the rock portion. In other words, the metal is not in veins or isolated chunks but as the matrix enclosing the mineral half of the mass. The stony-iron family is the rarest of the three main groups and they are among some of the most beautiful of all the meteorites.

Meteorites are the rarest types of rock on Earth. People send thousands of rocks to laboratories each year by individuals thinking that they found a meteorite. At best only one or two of these thousands is actually a rock from space. This article teaches people the basic characteristics of how to identify a meteorite. This guide provides simple at home tests that can help the reader to make a better determination if their rock is truly a space rock, or one of many terrestrial rocks known as meteor-wrongs. The pictures in the section below will help answer the question of what do meteorites look like.

Can You Tell Which Stone Has Fusion Crust?

Meteorites are not round balls, and most have irregular shapes. They are often angular with rounded off corners. Some show pits on their surface which we call thumbprints. Scientists call these marks regmaglypts, and they form as hot air currents erode the rock as it plunges through the atmosphere. People often find old rusty iron masses and confuse them for meteorites. Cannonballs and mill balls are often the sources of these meteor-wrongs. These rusty objects have an iron meteorite appearance, and chemical testing can help determine if they are man-made. The iron in meteorites is a nickel alloy and if the rock does not contain nickel, it is not an iron meteorite.

Can You Tell Which Stone Has a Meteorite Shape?

Meteorites are Solid, not Porous

The slag from industrial processes of manufacturing iron and steel can have metallic particles in it. Slag is one of the materials that is often confused for meteorites. This slag, however, will usually be porous or even bubbly which is a clue that it is not a real space rock. Meteorites, in some cases, may exhibit vesicles, but they are not porous or bubbly in appearance. Meteorites are solid rocks and may have pits on their surface, but inside they are dense. Volcanic rocks, basalts, and lavas are porous and are often mistaken for space rocks.

When meteorites are fresh, they are often black, and their fusion crusts may show flow lines and details that can help in identification. After a long time on the ground, they can change color, and fusion crusts wear away, and details disappear. The iron in meteorites just like iron in tools rusts from being out in the weather. As the iron metal rusts, it stains the inside rock matrix and the outside surface. Starting as spots of red or orange on the black fusion crust as time goes on the whole stone will become rusty brown colored. The fusion crust will often still be visible but no longer black.

Can You Tell Which Stones Are Meteorites by their Color?

Meteorites are Heavy and Have Metallic Iron

Meteorites are generally heavier than earth rocks of the same size. This is because of the metallic iron that most of them contain. Many meteorite hunters carry a diamond file with them to grind a small spot off rocks to see if there are any iron grains inside. With only a few rare exceptions metallic iron metal is not found in earth rocks. During eons of erosion and weathering, the iron in earth rocks is now in mineral form, and not metallic. The metal found in meteorites will be shiny and look like chrome. The appearance of the metal will not be a shiny gray sheen, that is often seen on some Earth rocks. Iron metal grains in rocks can also look like a space rock and are good indicators. However, there are more tests and many other factors to take into consideration.

The vast majority of meteorites contain some metallic iron while others are mostly solid iron. This iron makes most space rocks responsive to a magnet. Many stone meteorites will hold a strong magnet placed on them even if they are of a low iron type. This magnet test is one of the first simple tests that can be done at home or in the field. Rare earth magnets are inexpensive, and available from many sources, and they are the best for this test. But, there are earth rocks that also will hold a magnet and to make matters worse they are quite common. The two most often misidentified rocks are those that contain the minerals hematite and magnetite. These rocks can sometimes also look a little like meteorites, and other simple tests can rule these rocks out.

Both Magnets Stick. Which One Is The Meteorite?

It is a common practice in geology to rub a mineral or rock across a streak test plate and observe the color of the mineral powder line that is made. This is very useful for examining suspect space rocks as well. Meteorites will give a brown streak when rubbed on a test plate. The two most commonly misidentified rocks as mentioned earlier are magnetite and hematite. The streak color of hematite is a dark red. In fact, the coloring for rouge used in cosmetics was derived from crushed hematite. The streak color of magnetite is black. So even though the stone is responsive to a magnet, the mineral’s streak and lack of actual metal will reveal that it is terrestrial. You do not need to obtain an actual testing plate to make the streak. The non-glazed back side of a white ceramic tile will work fine for the test and can be obtained inexpensively.

The largest group of space rocks is the chondrite type of stone meteorite, and they contain nickel-iron metal in the form of tiny grains scattered throughout the matrix of the rock. There are man-made rock-like materials such as slags that may have bits of metal, but they will not have a solid rock-like appearance. If the stone is fresh and has a nice fusion crust it may not be desirable or even necessary to cut or grind off a spot to look for metal grains as the appearance of the fusion crust may be enough evidence of its cosmic origin. But, for example, if the stone is an old desert rock that is brown and meteorite like in appearance, you can first grind away a spot with a diamond file. Then, using a hand lens, look for metal grains to help determine if it is a space rock. Because the grains are made of iron and can rust, it is common for them to be altered, or somewhat absent in old weathered stone meteorites. Very old chondrite stones will still reveal some metal grains upon careful inspection. If you think it is a meteorite and you see no metal grains on the small spot you grind with a diamond file, it is a good idea to bring the stone home and do more tests. A small number of stone meteorites produce a gray powder when you grind them, and it is wise to bring these suspects home as well for further testing if they have other identifying characteristics.

Nothing is more important in learning to identify meteorites than seeing many images of real space rocks. Over thousands of years of weathering on Earth’s meteorites change so much it can become hard to recognize them. Fresh meteorites have a lot more clues to help in their recognition. We have many images on our site that can help familiarize the reader with how true meteorites look. Real space rocks are found every year by hikers and hunters and others who spend time out of the city. But, the vast majority of rocks thought to be meteorites are in fact earth rocks. Learning the characteristics of identifying meteorites is a challenging task, but it can be accomplished with a little study.

Think you may have found a meteorite?

A Colorado based company offering meteorite testing services called Geo Labs is a good place to start if you want to find out for sure. For about a hundred dollars they offer XRF analysis services for the specific purpose of meteorite identification. They use state of the art X-Ray Fluorescence technology to determine elemental compositions of a sample. Geo Labs is a good option for the first stage of the identification process. They can also assist with the more rigorous analysis and classification processes leading to publication in the Meteoritical Bulletin.

Can you buy meteorites for sale?

Yes, you can legally purchase a meteorite for sale and collecting them is a fun and fascinating hobby. They are scientifically interesting and many have amazing stories attached to them. There are many different ways to start collecting. We recommend starting small with a broad focus and then you can become more narrowly focused on which specimens to buy as your expertise grows.